January 12, 2012
I guess we officially have a pre teen, not the easiest stage we have had, not the hardest. The oldest truly is the litmus test for the other siblings. When do they get a phone? An I pod touch? The ability to babysit? To stay up late or make their own calls? We run on the conservative side of these questions but that is in part due to size and family dynamic. No phone yet (oldest turns 12 this summer), no i Pod touch, no phone calls, lots of staying up late:)

We had an incident where a group of boys was disrespectful in class, moms received an email and were told to talk to their sons at night. Great teachers, great quick response. I decided to pick my son up. In part to have one and one time to talk about what happened, and in part because respect is such a paramount value for our family. Mouthing off to a parent or teacher is absolutely 100% not OK, in any situation. I am not your friend (as much as I am working on that this year:) I am my child's parent. End of discussion. That said it was great to talk about respect and group dynamics immediately after this class had happened.

My son's take on this was it was a group dynamic that got a bit belligerent, out of hand with silly energy. We brainstormed getting out of that energy, getting a drink, finishing some homework, helping a student not involved. He wrote a half page apology, outlining where he knew he made mistakes, taking responsibility and saying he was really sorry. Before school today he brought that apology to the teacher.

When we were talking about it, over a bowl of tomato soup, he was telling about when he feels contrary. He said sometimes he just wishes he could go shoot hoops right in the middle of a class or switch desks. These were not the same example so we talked more. He and I are learning part of being a pre teen is needing breath, needing to get a moment to stop and think, to change the current dynamic. New hormones, new energy is pulling him in multiple directions and it takes work, actual work, to stop and think before he makes a move. He is a great kid, he was so receptive to talk it out, apologize and set goals.

This phase is a learning curve. I am doing my best to tackle it head on with love.

I had an aquatience last week remind me I had a lot of children, and said she was hesitant to celebrate our family because it seemed like too much .  This was a chance run in on friday. For those of you who know me, know how much I struggle with that assessment. Girls with eating disorders often say: "I feel like too much" kids who have behavioral problems know people say they are "too much" and big families are often seen as really neat from a distance but too much . First, everyone has their own too much threshold. It is ok that my passion is not yours! Spending all day making Kombucha like one of my fiends is too much for me, or singing in a show, but I am able to celebrate this difference without judging this difference.  Welcoming children into our home with a 100% chance of heartbreak (sadness over them leaving or sadness someone I love is loosing a birth parent) is not for everyone! My response to negativity is very often to retreat, get off social media, tr
Read more

Staying Peaceful Amidst the Rush 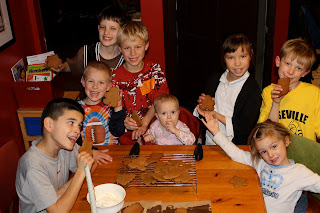 As we enter into the rush before Christmas I am reminded how hard it is to maintain a feeling of peace. This is the time gifts are going to be discovered if not wrapped, everyone will bring Christmas cookies if you don't get the Christmas meal assignments out and those homemade gifts you purchased paint sealer for and about to get smeared. Avoiding the Mall, making Christmas Cookies! Today when I ran out to return a birthday gift that my 8 year informed me would be a wii duplicate for his buddy, I was amazed by the frantic feeling in the store. The desperate phone calls about color and type of gloves, the lamenting of lost coupons and confusion over type of Legos on the list. Its like we need a broken record playing along with Bing Crosby reminding people to take a breath and remember the meaning this time of year. Every faith back round has that need to connect, a need to honor loved ones and a desire to reaffirm a sense of meaning. I noticed one of the boys was seemin
Read more