Showing posts from March, 2017
Show all

Prayers in the Margins, Time and Documenting the Hard Stuff 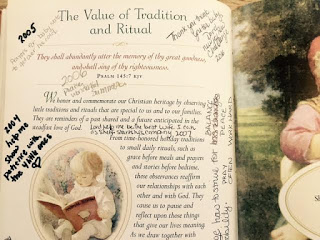 When I was a sophomore in college I purchased a prayer book at Sam's club of all places. Some roommates from college had memberships. I had never been in a warehouse store and it was fascinating, now it is a weekly habit. At 19, the idea of needing 10 pounds of hamburger at a time was unfathomable. Now it means two meatloaves and spaghetti sauce for weekly meals.  The prayer book was already dated when I picked it up in 1997, the pages featuring women with pastel dresses, lots of wicker furniture and primary color clad kids. Hidden with the photos were sound advice and biblical verses.  I started to jot down worries and moments of answered prayer. My biological father passed away and I wrote about my final conversation with him, simply writing Phoned Ken, he sounded like he was thinking about God. He said he hopes where he goes next will have the sound of birds. I'm sad.   Later on a new note on the same page jotted 5 years later, Praying for an easy birth, thank you
Post a Comment
Read more
More posts